Ekanit stars as Thailand turn on the style

One week before his 20th birthday, Ekanit Panya announced his arrival on the Asian football stage with a starring role in Thailand’s stirring 2-1 World Cup qualifying victory over the United Arab Emirates.

Chiang Rai United’s attacking midfielder netted the winning goal early in the second half, having provided the assist for Teerasil Dangda’s first-half opener.

The three points put Thailand on top of Group G despite the injury absences of Japan-based Chanathip Songkrasin and Thitipan Puangchan.

The War Elephants must now build on the positive momentum and finish the year on a high with positive results against Malaysia and Vietnam next month.

Here are three things to consider after an outstanding Thailand performance.

In Thai football’s competitive world of producing the youngest scorers in the league, Ekanit netted his first senior goal just before his 16th birthday, way back in 2015.

Having broken a record, Chiang Rai decided to loan him out to Chiang Rai City and then Chiang Mai rather than use him in a team that was developing loftier aspirations than the class of 2015.

Ekanit finally got a chance to shine on the bigger stage this season when Chiang Mai were promoted to T1. Such was his form, his title chasing parent club recalled him from loan mid-season and he has since played a key role in Chiang Rai’s title bid.

An excellent solo goal in a 4-0 destruction of champions Buriram United would have caught the eye of Akira Nishino and Ekanit’s performances in starts against Indonesia and Congo convinced the head coach to start him in a crucial test against the group’s top seeds.

Nishino’s faith was richly rewarded as Ekanit’s relentless energy set the tone and ensured that the UAE were always on the back foot. Ekanit combined industry with creativity and his floated cross was brilliantly headed home by Teerasil.

With the Thais having conceded the equaliser on the stroke of half-time, Ekanit’s far post finish from close range ensured there would be no way back for the visitors as Thailand continued to dominate.

Ekanit’s emergence on the international stage was the major talking point after the kind of victory that Thailand have often threatened but rarely achieved when it matters.

It’s early days but indications are that Nishino may be succeeding where predecessor Milovan Rajevac failed by making the most of Thailand’s attacking flair.

Rajevac may have been unfortunate not to have had the same access to the emerging attacking talents of Ekanit, Supachok Sarachat and Suphanat Mueanta but the Serbian immediately sought to turn Thailand into a more pragmatic side.

Nishino has quickly recognised the potential in making Thailand a more offensive force, with attack being the best form of defence. The midfield five gave the UAE little time to rest and constantly forced them into mistakes.

Sarach Yooyen looked like he had been given a new lease of life, while Chiang Rai Utd midfielder Phitiwat Sukjithammakul has been given his big chance and taken it.

The lapse in defensive concentration that saw Ali Mabkhout equalise demonstrated that old habits die hard but with just one goal conceded in three qualifiers, putting teams on the back foot has limited their attacking threat.

Perhaps the most positive aspect of Tuesday’s performance was how Thailand did not allow Mabkhout’s goal to alter their game plan. The War Elephants’ football history has not featured many important wins against high ranking sides from West Asia and confidence has often been fragile when under pressure.

But this was a performance full of guts and self-belief, with the only disappointment being that the game wasn’t wrapped up long before they had to endure a nervous five minutes of added time.

Just as it’s important to recognise the potential significance of Tuesday’s result, it will mean nothing if Thailand go to Malaysia and Vietnam next month and fail to take at least four points.

As the Thais found out in last year’s AFF Cup, the Malaysians have built a decent side under Tan Cheng Hoe and they arguably should have matched Thailand’s result against the UAE, instead of going down 2-1 after taking the lead last month.

Vietnam’s recent rise is well documented and Thailand could only take a point from them in last month’s match in Bangkok.

There’s a fine line between confidence and complacency and only similar performances will be enough to earn Thailand victories in what are sure to be hostile atmospheres at the homes of their Southeast Asian neighbours. 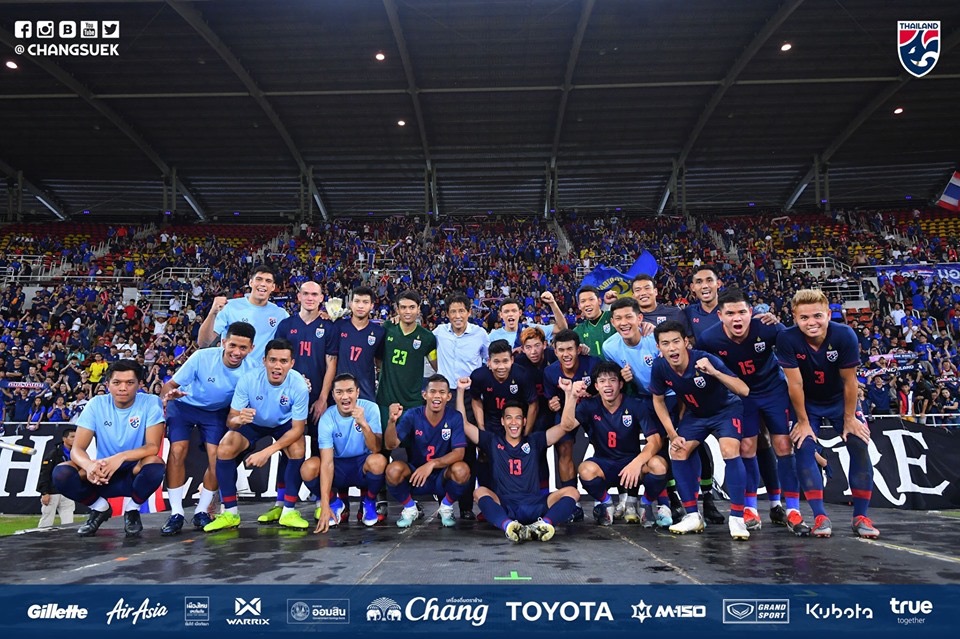 There was understandable euphoria after Tuesday’s win but UAE look a shadow of the side that defeated Japan in 2018 World Cup qualifying. Former Asian Player of the Year Omar Abdulrahman remains well off the pace as he comes back from serious injury and he was very much second best to the likes of Ekanit and Supachok.

Nevertheless, UAE are 55 places above Thailand in the FIFA rankings so this was a very significant scalp. But only by following up with good results in Kuala Lumpur and Hanoi will the War Elephants prove that they are very much on an upward trajectory.

Thailand aiming to tame Lions to seal place in semi-finals

Bangkok United’s Bonilla must be ruthless on return to Sukhothai